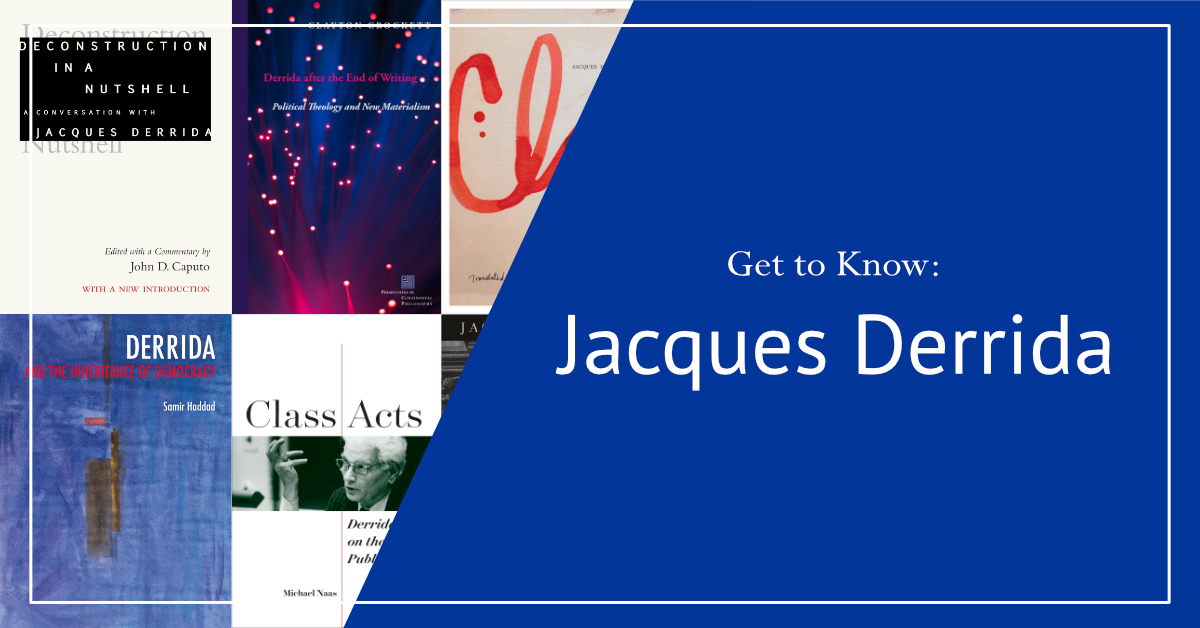 For the Get to Know Series, we’ve gathered together our collection of an author’s books and information about them, their work, and background. Combined with other materials such as reviews, interviews, discussions, and more, we hope it will become a resource to find out more about their life and works, and place their books in context.

Jacques Derrida, 15th July 1930 – 9th October 2004, was an Algerian-born French Philosopher best known for developing a form of semiotic analysis known as deconstruction, which he developed in the context of phenomenology. Many critics consider Speech and Phenomena (1967) and Of Grammatology (1967) to be among his most important works.

Jacques Derrida’s famously challenging book Glas puts the practice of philosophy and the very acts of writing and reading to the test. Presented here in an entirely new translation as Clang—its title resonating like the sound of an alarm or death knell—this book brilliantly juxtaposes Hegel’s totalizing, hierarchical system of thought with Genet’s autobiographical, carceral erotics.

Deconstruction in a Nutshell

This volume, now with a substantial new Introduction, represents one of the most lucid, compact and reliable introductions to Derrida and deconstruction available in any language.
Responding to questions put to him at a roundtable held at Villanova University in 1994, Jacques Derrida leads the reader through an illuminating discussion of the central themes of deconstruction. Speaking in English and extemporaneously, Derrida takes up with unusual clarity and great eloquence such topics as the task of philosophy, the Greeks, justice, responsibility, the gift, community, and the messianic. Derrida refutes the charges of relativism that are often leveled at deconstruction by its critics and sets forth the profoundly affirmative and ethico-political thrust of his work.
The roundtable is marked by an unusual clarity that continues into the second part of the book, in which one of Derrida’s most influential readers, John D. Caputo, elaborates upon Derrida’s comments and supplies material for further discussion.

Before the Law: The Complete Text of Préjugés

“How to judge—Jean-François Lyotard?” It is from this initial question that one of France’s most heralded philosophers of the twentieth century begins his essay on the origin of the law, of judgment, and the work of his colleague Jean-François Lyotard. If Jacques Derrida begins with the term préjugés, it is in part because of its impossibility to be rendered properly in other languages and also contain all its meanings: to pre-judge, to judge before judging, to hold prejudices, to know “how to judge,” and more still, to be already prejudged oneself.

Striving to contain that which comes before the law, that is in front of the law and also prior to it, how to judge Jean-François Lyotard then becomes perhaps a beneficial attempt for Derrida to explore humanity’s rapport with judgment, origins, and naming. For how does one come to judge the author of the Differend? How does one abstain from judgment to accept the term préjugés as suspending judgment and at once as taking into account the impossibility of speaking before the law, prior to naming or judging? If this task indeed seems insurmountable, it is the site where Lyotard’s work itself is played out. Hence this sincere and intriguing essay presented by Jacques Derrida, published here for the first time in English.

The first full-length study of transgender representations in art, fiction, film, video, and music
In her first book since the critically acclaimed Female Masculinity, Judith Halberstam examines the significance of the transgender body in a provocative collection of essays on queer time and space. Halberstam presents a series of case studies focused on the meanings of masculinity in its dominant and alternative forms’ especially female and trans-masculinities as they exist within subcultures, and are appropriated within mainstream culture.

For Strasbourg: Conversations of Friendship and Philosophy

For Strasbourg consists of a series of essays and interviews about the city of Strasbourg and the philosophical friendships Jacques Derrida developed there over a period of some forty years.
Written just months before his death, the opening essay, “The Place Name(s): Strasbourg,” recounts in detail, and in very moving terms, Derrida’s deep attachment to this French city on the border between France and Germany. More than just a personal narrative, however, the essay is a profound interrogation of the relationship between philosophy and place, philosophy and language, and philosophy and friendship. As such, it raises a series of philosophical, political, and ethical questions that might all be placed under the aegis of what Derrida once called “philosophical nationalities and nationalism.”

Class Acts examines two often neglected aspects of Jacques Derrida’s work as a philosopher, his public presentations at lectures and conferences and his teaching, along with the question of the “speech act” that links them. What, Michael Naas asks, is one doing when one speaks in public in these ways?
Whether in a conference hall or a classroom, Naas demonstrates, Derrida was always interested in the way spoken or written words might do more than simply communicate some meaning or intent but might give rise to something like an event. Class Acts bears witness to the possibility of such events in Derrida’s work as a pedagogue and a public intellectual.

Derrida after the End of Writing

What are we to make of Jacques Derrida’s famous claim that “every other is every other,” if the other could also be an object, a stone or an elementary particle? Derrida’s philosophy is relevant not just for human ethical language and animality, but to profound developments in the physical and natural sciences, as well as ecology.
Derrida After the End of Writing argues for the importance of reading Derrida’s later work from a new materialist perspective. In conversation with Heidegger, Lacan, and Deleuze, and critically engaging newer philosophies of speculative realism and object-oriented ontology, Crockett claims that Derrida was never a linguistic idealist. Furthermore, something changes in his later philosophy something that cannot be simply described as a “turn.” In Catherine Malabou’s terms, there is a shift from a motor scheme of writing to a motor scheme of plasticity.

Derrida and the Inheritance of Democracy

Derrida and the Inheritance of Democracy provides a theoretically rich and accessible account of Derrida’s political philosophy. Demonstrating the key role inheritance plays in Derrida’s thinking, Samir Haddad develops a general theory of inheritance and shows how it is essential to democratic action. He transforms Derrida’s well-known idea of “democracy to come” into active engagement with democratic traditions. Haddad focuses on issues such as hospitality, justice, normativity, violence, friendship, birth, and the nature of democracy as he reads these deeply political writings.