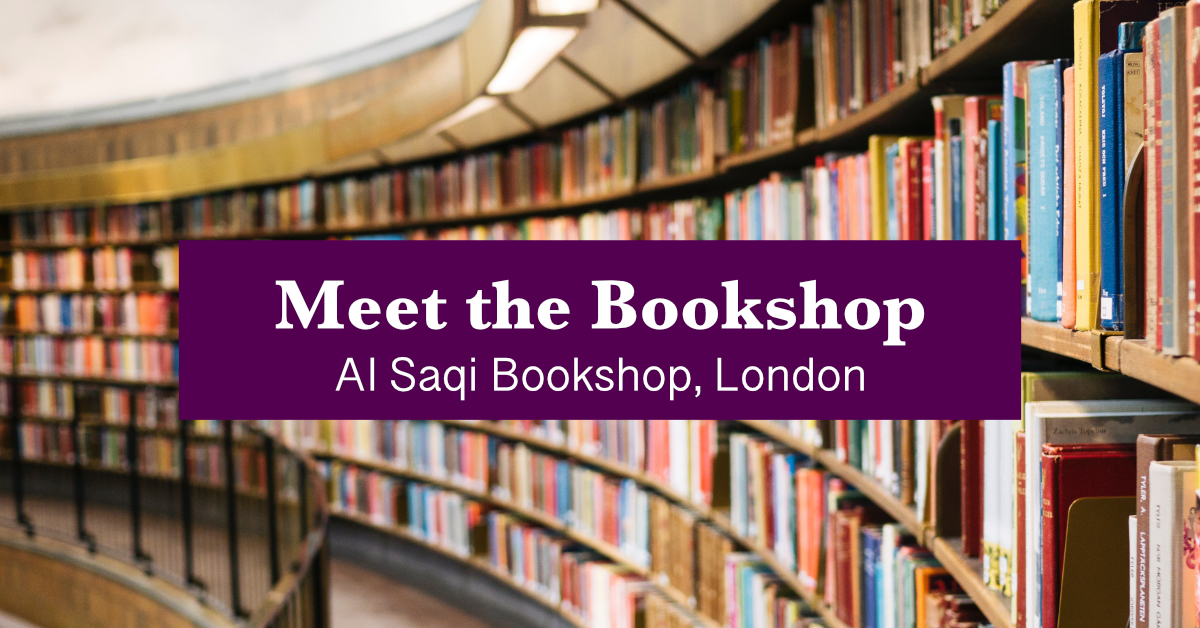 We’re revisiting some of our favourite independent bookshops, to hear how the past few years have been since our last interview.

We first spoke with Salwa Gaspard, Director at Al Saqi Bookshop in London, in 2016. She revisited her post to tell us more about the changes – and challenges – of the last few years.

My husband, Andre Gaspard, came to London with his childhood friend, Mai Ghoussoub, during the Lebanese civil war. Life in London was very different back in the 1970s to how it is now. The two of them were amazed that there was nowhere in London for the Arab community to gather and buy books in Arabic or about the Middle East. We were starved of our own culture. The shop’s name means “water seller” in English – you could say we were quenching our thirst for the life and the culture we’d left behind, and that was being destroyed by war.

Neither Andre, Mai nor myself had ever had anything to do with the book trade –Andre was a lawyer, Mai had studied Mathematics and I had a degree in Philosophy. Despite all of this, Mai recognised the urgent need for an Arabic language bookshop in London, and believed that we should be the ones to open it.

In 1979, we gathered together the little money we had and opened the very first Arabic bookshop in London. After almost forty years, we are still in the same small shop on Westbourne Grove in Bayswater. The area was very different back then – very run down, and with many more independent shops and restaurants than today. It was a small vibrant community, and everybody working and living on the street was friendly and knew each other. There was a big Arabic-speaking population in London and our customers travelled from across the city to visit the shop. Our customers came from all over the Arab World – there were Lebanese people, Libyans and Iraqis, as well as Gulf Arabs who used to come on the holidays in the summer months.

We started out just selling Arabic books, but later expanded our collection to include English language titles. At present, sixty per cent of our stock is in Arabic and the rest in English. A little while after opening the shop we decided to launch our own publishing company in the UK – Saqi Books, which continues to release urgent and authoritative books about the Middle East and North Africa in the English language. Our aim was twofold: to bring Arab culture to London, but also to inform and inspire readers, both in the UK and the wider Arab world, by publishing writing that would have otherwise remained unavailable. Our first books included Beyond the Veil by Fatema Mernissi, an iconic Moroccan sociologist, feminist and writer, as well as Amin Maalouf’s Crusades through Arab Eyes, which remains one of our bestsellers today. Publishing anything in Lebanon during the 70s and 80s would have been out of the question because of the civil war, but we later went on to open a publishing company in Beirut – Dar al Saqi – which is renowned for publishing progressive and ground breaking works, and the best in new Arabic literature and non-fiction.

Our bookshop on Westbourne Grove has been the beating heart of the Arab community in London since 1979. There is still a flutter of excitement when new books arrive from Beirut and our regular customers know when best to come browse our new arrivals. I would say that our longevity and success is down to the fact that we have remained completely independent, tolerant and open-minded. The bookshop is a place where people from all walks of life and backgrounds can browse, side by side, exploring an eclectic selection of books in both Arabic and English. We will basically stock any books on Arab culture, politics or ideas that promote a better understanding of Arab society as a whole – this of course includes writings from different political stand points and also books on topics considered taboo in Arab culture, such as homosexuality.

Our window displays are filled with beautiful and colourful books on art and literature; we want to draw new customers into the shop and remind them that Arab culture isn’t limited to political violence!

We have found that the more the Middle East is engulfed in crisis and war, the more people want to buy non-political books. Books are escapism. The same logic applies to post-pandemic book shopping. People want to enjoy life after the lockdowns put a halt on regular life. Our sections on art, fiction, poetry, cookery, and an children’s books do very well.

Over the last three years we have faced many obstacles, some of which have impacted other independent bookshops and others that are exclusive to Al Saqi. The pandemic was of course the most impactful and continues to affect us to this day. Our shop was closed through all three lockdowns which hit us hard financially. We had to close again over the Christmas period, ordinarily a busy time for us, after all three of our booksellers caught covid and had to isolate.

One silver lining of the pandemic was the launch of our Instagram account @alsaqibookshop (– follow us!) We really value our connections with people who come into the shop in person, however we realised that many people love to shop online for books these days or simply want to connect with us from the comfort of their own homes. Our account has allowed us to connect with our customers all over the world and continues to grow every day.

Last year we were also hit with another tragedy in the form of the severe flooding of our basement. On an afternoon in July 2021 nearly three inches of rain fell in 90 minutes causing flash floods in several areas of west and south London. Our bookshop’s basement was flooded with wastewater up to one metre high, damaging the building and hundreds of books worth of stock.

Times are a little harder now for booksellers so it is important for us to go the extra mile for our customers, both old and new. Our staff are incredibly knowledgeable, friendly and helpful, which is the reason why our customers come back again and again.