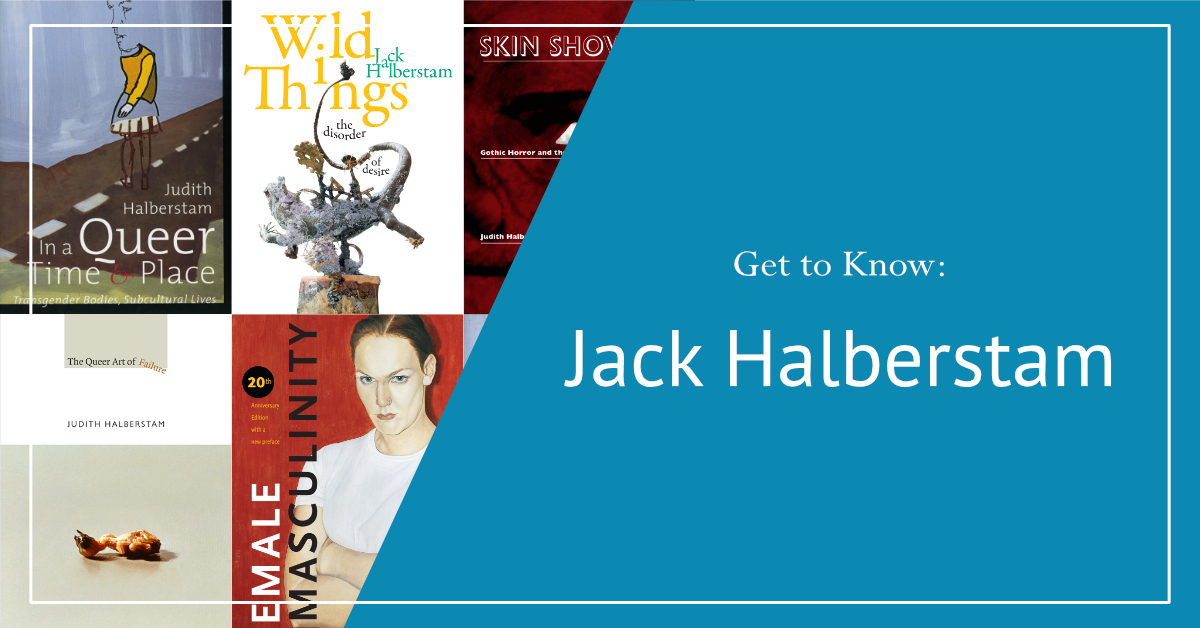 For the Get to Know Series, we’ve gathered together our collection of an author’s books and information about them, their work, and background. Combined with other materials such as reviews, interviews, discussions, and more, we hope it will become a resource to find out more about their life and works, and place their books in context.

For Pride Month this June, we’re looking at the work of Jack Halberstam, Professor of Gender Studies and English at Columbia University

Wild Things: The Disorder of Desire

In Wild Things Jack Halberstam offers an alternative history of sexuality by tracing the ways in which wildness has been associated with queerness and queer bodies throughout the twentieth century. Halberstam theorizes the wild as an unbounded and unpredictable space that offers sources of opposition to modernity’s orderly impulses. Wildness illuminates the normative taxonomies of sexuality against which radical queer practice and politics operate. Throughout, Halberstam engages with a wide variety of texts, practices, and cultural imaginaries—from zombies, falconry, and M. NourbeSe Philip’s Zong! to Maurice Sendak’s Where the Wild Things Are and the career of Irish anticolonial revolutionary Roger Casement—to demonstrate how wildness provides the means to know and to be in ways that transgress Euro-American notions of the modern liberal subject. With Wild Things, Halberstam opens new possibilities for queer theory and for wild thinking more broadly.

In this quintessential work of queer theory, Jack Halberstam takes aim at the protected status of male masculinity and shows that female masculinity has offered a distinct alternative to it for well over two centuries. Demonstrating how female masculinity is not some bad imitation of virility, but a lively and dramatic staging of hybrid and minority genders, Halberstam catalogs the diversity of gender expressions among masculine women from nineteenth-century pre-lesbian practices to contemporary drag king performances.

Featuring a new preface by the author, this twentieth anniversary edition of Female Masculinity remains as insightful, timely, and necessary as ever.

The Queer Art of Failure

The Queer Art of Failure is about finding alternatives—to conventional understandings of success in a heteronormative, capitalist society; to academic disciplines that confirm what is already known according to approved methods of knowing; and to cultural criticism that claims to break new ground but cleaves to conventional archives. Jack Halberstam proposes “low theory” as a mode of thinking and writing that operates at many different levels at once. Low theory is derived from eccentric archives. It runs the risk of not being taken seriously. It entails a willingness to fail and to lose one’s way, to pursue difficult questions about complicity, and to find counterintuitive forms of resistance.

In a Queer Time and Place: Transgender Bodies, Subcultural Lives

The first full-length study of transgender representations in art, fiction, film, video, and music
In her first book since the critically acclaimed Female Masculinity, Judith Halberstam examines the significance of the transgender body in a provocative collection of essays on queer time and space. Halberstam presents a series of case studies focused on the meanings of masculinity in its dominant and alternative forms’ especially female and trans-masculinities as they exist within subcultures, and are appropriated within mainstream culture.

Skin Shows: Gothic Horror and the Technology of Monsters

In this examination of the monster as cultural object, Judith Halberstam offers a rereading of the monstrous that revises our view of the Gothic. Moving from the nineteenth century and the works of Shelley, Stevenson, Stoker, and Wilde to contemporary horror film exemplified by such movies as Silence of the Lambs, Texas Chainsaw Massacre, and Candyman, Skin Shows understands the Gothic as a versatile technology, a means of producing monsters that is constantly being rewritten by historically and culturally conditioned fears generated by a shared sense of otherness and difference. Deploying feminist and queer approaches to the monstrous body, Halberstam views the Gothic as a broad-based cultural phenomenon that supports and sustains the economic, social, and sexual hierarchies of the time. Excessive interpretability, Halberstam argues, whether in film, literature, or in the culture at large, is the actual hallmark of monstrosity.