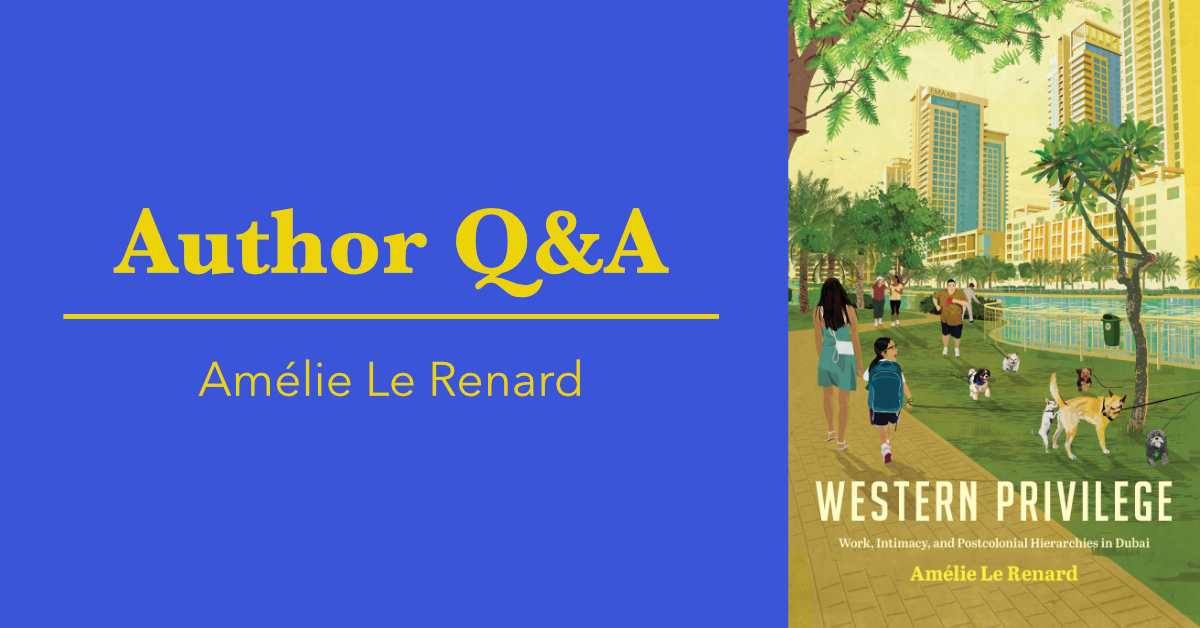 In Dubai, as in many places of the world, having or not having a Western passport produces a clear split. Having one facilitates passage across national borders, and represents an important differentiator and ranking criterion within the globalized job market. Western passports holders in Dubai get higher salaries, which allows them to live in expensive neighborhoods, adopt leisure practices connoted as luxurious, sponsor family members, and, for some of them, to hire domestic employees. This differentiates them from other categories of inhabitants in this city where more than 90% of residents are foreigners. My book, based on 98 interviews, analyzes how Western passport holders with various backgrounds in terms of gender, class and race inhabit this privileged status. Most people I met were ambivalent, as they both denounced what they perceived as the injustice of Dubai social order, while at the same time benefitting from it, reproducing it, and, through certain arguments, justifying it. For instance, many people I met thought they deserved higher salaries because they believed that Western degrees are better, more demanded, or that people from Southern countries need lower salaries. They participated in essentializing professional skills as Western.

Beyond work, intimacy was central in my interviewees’ distinction from “others.” The book argues that Western distinction in Dubai lies on specific forms of heteronormativity. On the one hand, Western, white, upper-class couples, in spite of a clear labor division among spouses, identify with gender equality and women’s emancipation in contrast with “others” represented as oppressed, sexist, or as frustrated sexual predators. On the other hand, single Westerners often long for serious, authentic relations, which they present as impossible in Dubai. Many associate authentic love with the West and Westerners, in contrast to Dubai’s so-called materialism and superficiality.

Inspired by postcolonial feminism, my book looks at both work and intimacy to explore how men and women, white and non-white Western passport holders perceive Dubai’s social order differently depending on their trajectories, and how they nevertheless participate in reproducing it, for instance by implementing salary differentiation when recruiting, or by routinely racializing other inhabitants, described as “locals,” “Arabs,” Filipinos,” or “Indian.”

I chose Stanford University Press because it is a very central and renowned publisher for Middle East Studies, and also because I had a very good experience with my previous book! I really appreciate the combination between academic work, as books are peer-reviewed, and professional editing, which transforms years of hard work into a beautiful object, with a nice cover. The cover of Western privilege is a piece of art by Clare Napper, and it represents a neighborhood in Dubai called The Greens.

I do enjoy writing and… rewriting, since a book means a lot of different versions! And in my case, it also implies translating between French and English, in both directions, since my first texts about the subject were written in both languages. A professional translator, Jane Kuntz, translated the final version of the book that I had first adapted from its French counterpart.

However, I have to say that my favorite part in research is the first phase: conducting interviews. What I love is how the interview situation allows me to have deep conversations with people I never met before.

What is the last thing you read not for research or work?

I read The Other Americans, a novel by Laila Lalami. I loved the writing style and the ways in which the novel approached subjects such as grief, family dynamics, immigration and structural racism.

I am working on two collective editorial projects in French. First, I am co-editing a special issue on whiteness and migration to “overseas” territories (societies that did not become independent but were integrated to France as “departments”). Second, I am co-editing a book about gender and revolution in the Middle East and Maghreb, mixing scholarly chapters and interviews with activists. I am also exploring literature on sexual violence for my next fieldwork project.

Amélie Le Renard is Permanent Researcher at the National Center for Scientific Research, Centre Maurice Halbwachs, Paris. She is the author of A Society of Young Women: Opportunities of Place, Power, and Reform in Saudi Arabia (Stanford, 2014) and Western Privilege: Work, Intimacy, and Postcolonial Hierarchies in Dubai (Stanford, 2021, translated by Jane Kuntz.)