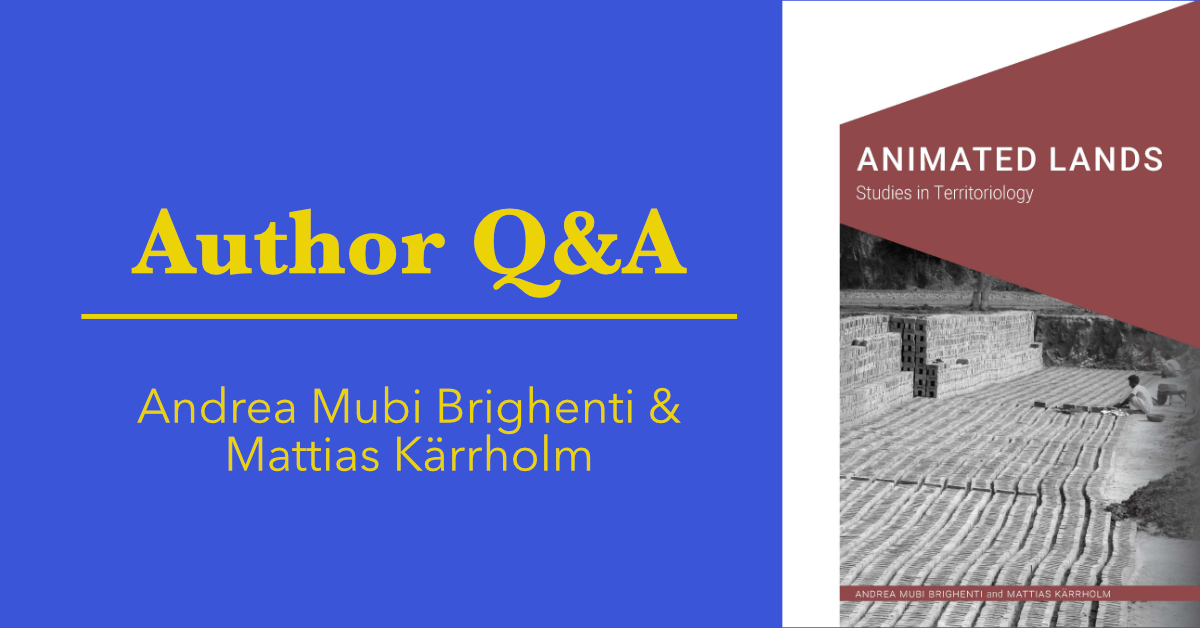 How did your book come together?

Animated Lands is a book that encompasses different case studies, but they are all strongly integrated into a single research programme. We got to know each other over a decade ago, and soon started collaborating around our shared interest for understanding social-spatial phenomena. We have since been organising seminars, attending conferences, lecturing together, and paying research visits to each other to bring the project to completion. We have not started from a single theory, a paradigm, or anything of that sort, but mostly from passion, as well as from an expanding curiosity for the topics we were stumbling upon along the way. A number of themes started resonating, took speed, and at some point we felt the book was just ripe.

Over time, we increasingly realised that, in urban and architectural studies, territory – or if you want, more simply, land – was an underrated notion, yet one with a lot of potential. So we picked up an old word, ‘territoriology,’ and tried to use it in a new sense. Seeking to retrieve and revive a science that was born under positivistic auspices, and dealt with politically charged phenomena, we thought that we also needed to warn the reader against the possible regressive uses of these notions, and how easy it is to get trapped into a certain worldview. That’s why we have striven to promote a different take on the life of territories – what they are about, what they accomplish. To counter gloomy and regressive views, we sought to foreground aspects of vitality, spontaneity and unpredictability that are ever-present in territory-making.

What is your favorite book? Why?

We do not have a favourite book in the absolute sense, but there are some books to which it is always a pleasure to return to. One is, inevitably, Walter Benjamin’s Arcades Project. It’s a book that’s impossible to read from start to finish, simply because it is itself unfinished, and made only of fragments. Together with all the other urban essays by Benjamin (including masterpieces such as Berlin Childhood around 1900), returning to Arcades never fails to provide fresh inspiration, intuitions and emotions. It’s more than cultural theory and urban history – to our minds it is actually sustained, fully accomplished territoriology.

What book would you recommend right now?

The list could be quite long! We are constantly looking for inspiration across the domains of literature, philosophy, the humanities, as well as social and life sciences. But for one, Bruce Chatwin’s short-prose collections What Am I Doing Here? and Anatomy of Restlessness are colourful, charming explorations into how territorial life generates its own inherent deterritorialistions. Chatwin’s forays into what he called ‘the nomadic alternative’ encompass, stories, encounters, documentations, self-analyses… ‘Why – he famously asked – do I become restless after a month in a single place, unbearable after two? (I am, I admit, a bad case.)’ Questions like this one are the sort of powerful, provocative questions we like to engage with.

…more territoriology! Animated Lands is, above all, an invitation. Rather than launches and presentations, we envisage to put the book directly to use in practical workshops, where participants could experiment their own way into inquiring territories. Most rewarding for us would be to learn that some other scholars and readers are similarly using our book this way, as a possible blueprint for carrying out further fresh research into the many facets of social-spatial life.

Andrea Mubi Brighenti is a professor of social theory at the University of Trento, Italy. He is the author of The Ambiguous Multiplicities: Materials, Episteme and Politics of Cluttered Social Formations. Mattias Kärrholm is a professor of architectural theory at Lund University, Sweden. He is the author of Retailising Space: Architecture, Retail and the Territorialisation of Public Space. Together, they are the authors of Animated Lands: Studies in Territoriology (2020) part of the Cultural Geographies + Rewriting the Earth series, published by the University of Nebraska Press.